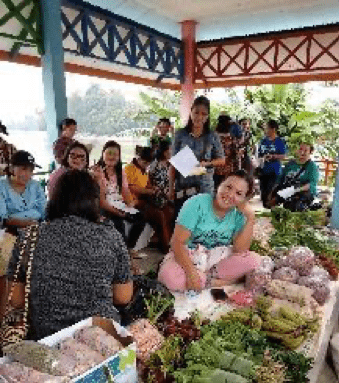 Equality in natural resource and landscape governance is fundamental and concerns: tenure rights, fair sharing of costs and benefits; procedural aspects like participation in decision-making, access to information, being consulted, women leadership, etc.

In Malinau, North Kalimantan, Indonesia, The Association of Women Organizations (GOW) has been working with women farmers and traders, with the support of the local government, to create more awareness for green and healthy living and empower women at the local market to drive change for more sustainable and equitable production and consumption. In rural markets in Indonesia, women represent the majority of the traders and control most of the small trade.

While this is part of so-called ‘informal economy’ it is a very significant sector in developing countries and generates important income for women to exit a cycle of poverty. In Malinau, women sell food products like rice, vegetables, fruits and other processed food that they have themselves cultivated and prepared. Moreover, through the markets, women become agents of agro-biodiversity conservation and active participants in caring for the environment. Many varieties of vegetables and fruit sold at the market are uniquely local and can only be found there. These are the result of the efforts of women to ensure that the seeds they have themselves inherited from their mothers and grandmothers are preserved and passed on. Local plants are also the basis for good and healthy nutrition given the characteristics of many varieties, cultivated and/or collected from the wild.

The initiative started with a few women from nearby villages who decided to explore the abundant harvest of local vegetables intercropped by women in the rice fields and come to town to sell their produce walking door to door and carrying the produce in big baskets. While physically demanding, the proceeds from the sales helped women fulfill family needs especially the education of their children. A few years later, a private owner decided to allow the women to use his premises to sell the produce twice a week, in the early hours of the mornings. However, activities were still not legal and there was no control over quality.

Seeing the potential of the initiative, and the high demand of customers for local, fresh and organic produce otherwise unavailable at the central market, the local government finally granted the women traders an exclusive and separate marketplace, safe and permanent space for the women to continue to sell. Traders-farmers are for 95% Indigenous women.

The women have decided to organize themselves and under the advice of GOW they formed a committee (POKSUS) to oversee activities at the market, establish rules, and resolve problems together. The women asked for training to improve the standards of the market (Internal Control System) and marketing skills. The women also agreed basic rules to guarantee cleanliness, reduce the use of plastic, enhance the cultural aspects of the market (use of handicrafts and display). They also agreed on standards and fair unit price to avoid competition. Proceeds from sales for an individual trader can range from Rp 800,000 to over 1,500,000/month, with market operations twice/week.

GOW also helped the women develop a simple ‘traceability’ tool to collect information about basic ‘lifecycle’ analysis of the produce to control origin and prove that it is organic and natural.

Initiatives like the women markets rely on close interactions between sellers and buyers and on relations of knowledge and trust. They represent very promising platforms for conveying key messages around biodiversity conservation, sustainable consumption of green, healthy, local and fair products, and influence directly the food choices of many women and families.

The potential of this initiative is two-fold. First, to support the empowerment of women and supporting local green entrepreneurship to champion healthy nutrition and preservation of local plant varieties and seeds (agro-biodiversity). Secondly, to create stronger awareness among women of their powerful role in food security, food sovereignty and family health. The initiative has also high replication potential. In several villages around the town of Malinau, and in sub-districts of the interior, women have set-up weekly markets.

During the recent pandemic, the lock-down imposed by local authorities in the interest of public health affected the market operations. The women’s market was closed down and caused economic losses to the traders. Their utmost concern was being to continue to transfer money to their children pursuing higher education in other cities. The impact of pandemic effected many of the market vendors and their livelihoods. Some of them took the risk of selling their produce at different locations to be able to provide for their families. In order to address this issue, they also wrote a letter to the Head of the District to reconsider the shut-down of the market. With the support of local members of the legislative assembly, they engaged in direct negotiations and were able to re-open market operations as usual at the end of June.

Gender equality and female empowerment are core development objectives, fundamental for realization of human rights and key to effective, equitable and sustainable development outcomes. Women are biodiversity defenders and custodians of nature in their own right. Women in rural areas make countless choices and decisions to build the economic resilience of their families, help strengthen community solidarity and care for the land, waters and their resources. Therefore, equality in natural resource and landscape governance is fundamental and concerns: tenure rights, fair sharing of costs and benefits; procedural aspects like participation in decision-making, access to information, being consulted, women leadership, etc.

Women have the knowledge and practice sustainable use of biodiversity, but often are prevented from being part of decision-making and policy development. It has been shown in the key sectors linked to natural resource governance across the world (i.e. agriculture, forestry and fisheries) that women play vital roles. When women have a right to access, use and control natural resources, and to do so safely, this is a way to address poverty and their right to adequate standards of living and well-being.

Women play a crucial role in rural economies and their communities to safeguard biodiversity for the resilience and sustainability of local and traditional agricultural systems, food security and sovereignty. In the sustainable development agenda, the role of women in farming, protecting agrobiodiversity and promoting sustainable agricultural practices is recognized. The Rio+20 final document, The Future We Want, recognizes and underscores  “that women have a vital role to play in achieving sustainable development…” and “…the importance of empowering rural women as critical agents for enhancing agricultural and rural development and food security and nutrition.” The activities carried out, practices and resources used in these sectors are often themselves gender specific. The traditional knowledge and know-how that women have are unique to them and can inspire new initiatives with positive impact on the local economy, women’s benefits and agro-biodiversity or biodiversity conservation.

The potential of this initiative is two-fold. First, to support the empowerment of women and supporting local green entrepreneurship to champion healthy nutrition and preservation of local plant varieties and seeds (agro-biodiversity). Secondly, to create stronger awareness among women of their powerful role in food security, food sovereignty and family health.

Join us on October 27, 2020 for a dialogue with representative from FOMMA (Alliance of the People of the Kayan Mentarang National Park), Indonesia to address food sovereignty and gender for a transformative CBD Post2020 Global Biodiversity Framework.

For more details about the Dialogue 1: Food sovereignty, gender and poverty eradication and registration, please visit this link.