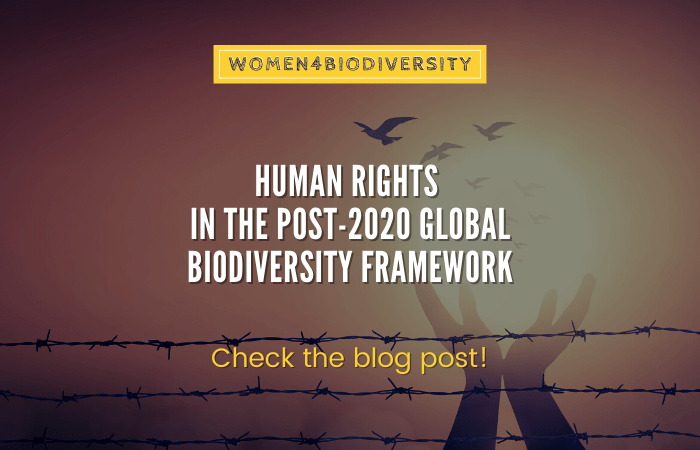 Originally written and posted in Spanish for Reforestamos México HERE

A human rights-based approach in the post-2020 global biodiversity framework is essential for both biodiversity and humanity – also part of biodiversity – to thrive.

The Convention on Biological Diversity (CBD) provides a global legal framework for action on biodiversity. It brings together countries who are Parties to the Convention in the Conference of the Parties (COP), which is the Convention’s governing body that meets every two years, or as needed, to review progress in the implementation of the Convention, to adopt programmes of work, to achieve its objectives and provide policy guidance.

Currently under negotiations among the Parties to the CBD is the post-2020 global biodiversity framework, an international strategic plan to guide biodiversity policy for the next 30 years, with a vision of “humanity living in harmony with nature” in 2050.  This Framework will be implemented in synergy with other environmental instruments, to be adopted in the Fifteenth meeting of the COP to the CBD.

Part of the agenda of the recently held March 14 to 29 CBD meetings in Geneva was the post-2020 global biodiversity framework negotiations. It was discussed particularly under the third Open-Ended Working Group (OEWG-3) meeting on the Framework where some steps were taken to agree on the framework’s targets and goals, as well as relevant indicators.

Conservation and governance are prerequisites to living in harmony with nature – the ongoing CBD Vision – a human rights-based approach (HRBA) to biodiversity use. This means that whichever policy or action to regulate human relations with nature should be designed and applied not only to avoid violating them but also to guarantee them actively, and not the opposite of just taking into account ecological or economic elements when it comes to the environmental policy design.

A human rights-based approach in the environmental context means that everyone’s rights to land, self-determination, water, and rest should be equally observed. Moreover, HRBA helps identify and protect the ones that have been vulnerable through history, meaning the local communities and indigenous people, the rural population and all of those at the forefront of natural defence and conservation.

Two vital pillars of HRBA are gender equality and intergenerational equity, which have been brought to the negotiations by the UN CBD – Women Caucus and other major groups to be integrated along the GBF.

Conservation with consideration for human rights

The post-2020 global biodiversity framework has 21 action-oriented targets for urgent action over the decade to 2030.

The first set of targets, Targets 1 to 8, focus on reducing threats to biodiversity, including freshwater, marine, and terrestrial ecosystems, including forests. The targets include specific figures, like the restoration of 20 per cent of degraded ecosystems and the conservation of 30 per cent of land and sea areas globally.

However, historically, conservation has affected the rights of people living there. For example, in the establishment of protected areas, indigenous peoples and local communities have been driven out of their homes. This has happened in forests.

Ramiro Batzin, co-chair of the International Indigenous Forum on Biodiversity (IIFB), says: “By respecting the territoriality of Indigenous Peoples, respecting our knowledge and contributions, this framework will succeed!”

Targets 9-13 of the post-2020 global biodiversity framework cover meeting people’s needs through sustainable use and benefit-sharing. This set includes many topics such as sustainable management of wild terrestrial, freshwater and marine species; green and blue spaces for human health and well-being; water and air quality and fair and equitable sharing of benefits arising from genetic resources.

The current version of the negotiation framework includes “improving human health and well-being while safeguarding livelihoods of rural communities” and “safeguarding customary sustainable use by indigenous peoples and local communities.”

So while hunting or harvesting of a particular species may be prohibited under normal circumstances, indigenous peoples practising sustainable use can still continue. This is important, especially when that species is their food source and is part of their culture.

A framework for all

Meanwhile, Targets 14-21 talk about the tools and solutions for implementation and mainstreaming. This set covers different issues such as business impacts on biodiversity, sustainable production and consumption, risk management, perverse incentives and financial resources. Mainly, targets 20 and 21 specifically aim to cover indigenous peoples’ concerns, and Target 21 also mentions women, girls, and youth and their rights over lands and territories.

Included in the current draft under negotiations is a new target, Target 22, proposed by Costa Rica and supported by the Group of Latin American and Caribbean States (GRULAC), as well as by Cote d’Ivoire, Togo, Benin, Cameroon, and Tanzania during the Geneva meetings and allies from other groups and organisations.

The proposed text for the stand-alone gender equality target reads: “Ensure women and girls’ equitable access and benefits from conservation and sustainable use of biodiversity, as well as their informed and effective participation at all levels of policy and decision making related to biodiversity.”

“There is irrefutable evidence that the only way this can be a strong instrument is by incorporating and ensuring a strong human rights element – respecting the role of Indigenous Peoples and Local Communities – into the new global biodiversity framework,” IIFB Co-Chair Lucy Mulenkei said.

However, much work remains to be done, since in the Geneva meetings, despite dedicating 3 full weeks, progress was not significant. There are still many different positions between countries, so in June there will be a fourth working meeting with the aim of reaching more agreements before COP 15 of the Convention. With regard to human rights, it will be necessary to continue insisting that various elements be included both in the objectives and goals and in the monitoring framework.