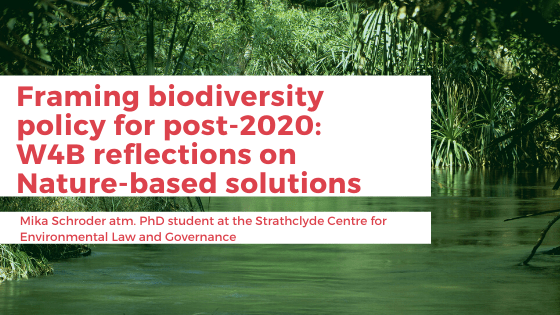 By Mika Schroder atm. PhD student at the Strathclyde Centre for Environmental Law and Governance

As participants of the second meeting of the CBD Open-ended Working Group on the post-2020 Global Biodiversity Framework (OEWG-2020) met in Rome in early February 2020, discussions were buzzing with talk of ‘nature-based solutions’ (NBS) underpinning future biodiversity policy. The concept, stemming primarily from discussions at the UN Environment Programme (UNEP) and the UN Framework Convention on Climate Change (UNFCCC), refers to the idea of protecting and restoring ecosystems and building up resilience against future harm. At the meeting in Rome, it received broad and enthusiastic support from several countries and large international NGOs, especially those based in the global North. However, the women’s caucus, along with several grassroots organisations, have been more hesitant in endorsing the approach, due to inherent uncertainty related to the term, as well as emerging concerns regarding its adoption and implementation elsewhere. While not disputing the need to achieve that which the concept sets out to do, the quickness in which countries and large organisations are ready to adopt it shows a lack of recognition of some of its more problematic aspects, including rumours of its co-optation by corporate interests, lack of safeguards for protecting the rights of indigenous peoples and local communities, as well as the purported overly-technical, exclusionary and top-down manner of its decision-making processes. In light of this, the W4B held an internal discussion amongst its members, ranging from grassroots organisers, activists and researchers. The below aims to offer some insight into that discussion.

Having first emerged from several years of discussions at UNEP, the increasingly popular concept of NBS is underpinned by calls for ‘an urgent, massive investment effort to conserve and restore biodiversity and ecosystems, and drastic change[s] in the way we interact with and depend on nature, to unlock its full potential’. While proponents have highlighted its opportunity for addressing major societal challenges such as food insecurity, climate change, water insecurity and human health, several have pointed out that its use in practice has proven more problematic.

Within the UNFCCC, where the term has gained significant traction, it has mainly materialised through discussions on carbon storing, for instance through agroforestry, reforestation and afforestation, with the aim of reducing land degradation while capturing and storing carbon. Again, although proponents highlight its potential in addressing climate change, concerns have emerged relating to corporate actors (including oil, gas and mining companies) using the NBS discourse in suggesting that they too contribute to climate solutions, all the while continuing business as usual. Apart from illustrating how the NBS discourse can be used in ways that side-track key social and environmental concerns (with devastating results), this also shows that the concept is unable to address the growing worry that market and commodity logic is increasingly making its way into environmental protection discourses across Multilateral Environmental Agreements (MEAs), such as the UNFCCC and CBD.

Furthermore, at both UNEP and UNFCCC, we’ve been told that the concept has brought with it an overly technical approach to decision-making, something which leads to the exclusion of certain actors. With the concept grounded in positivist knowledge structures and approaches, decision-making processes risk neglecting the importance of non-western scientific value and knowledge systems. As pointed out by one caucus member, a grassroots organiser from the Caribbean region, this seriously undermines local-to-global solutions and decision-making, something long recognised as favourable to the traditional top-down model of international environmental decision-making. The fear now is that the incorporation of NBS within the CBD framework will reinforce these existing inequalities.

Bringing NBS into the CBD

The concept had already worked its way into the zero draft of the Post-2020 Global Biodiversity Framework ahead of the meeting in Rome. Within the recommendation adopted at the meeting, NBS features more extensively. During our call, we were told that preliminary analysis by some groups have found that, compared to the ecosystem-based approach, not much seems to have changed – people ‘on the ground’ remain beneficiaries to policies (as opposed to being recognised as important, oftentimes leading, actors in the process of decision- and change-making), and there is very little linking NBS to safeguarding human rights. Similarly, while discussions at the CBD have begun fleshing out standards for governance, there are no robust guarantees for fair and inclusive decision-making processes, nor are there any clear modalities for how indicators will be developed and implemented in an inclusive manner.

Related to this, one caucus member, an indigenous activist from the African region, pointed out that from an indigenous perspective, proposals such as these are discouraging since what is being done is effectively giving a ‘fancy’ name to something that many indigenous and rural communities have been doing throughout generations. She noted that it is typical within these processes that something gains strength and importance only when it’s brought forth in technical language. This is telling of the unequal recognition accorded to diverse knowledge systems within MEA’s, including the CBD. This despite wide acceptance across the Convention of the importance in recognising, respecting, protecting and incorporating indigenous knowledge systems within biodiversity policy. Therefore, another worry is that conservation under the NBS framing may reinforce these inequalities, providing new avenues for governments, institutes and corporations to infringe upon the lives and rights of indigenous and rural communities (with these disproportionally impacting women and girls) in the name of biodiversity conservation or in green-washed ‘development’ endeavours. We therefore stress the importance of ensuring that, moving forward, negotiating text incorporates safeguards for individuals and communities alike (especially women and girls) so to protect against exclusionary, top-down decision-making.

As observed by several of the caucus members, what seems to be missing from the concept of NBS is the human, societal and cultural aspect needed to tackle biodiversity loss. This begs the question of where NBS fits within the broader nature-culture discussions at the CBD, which stress the inextricable link between nature and culture, highlighting that we must recognise and address cultural behaviours both beneficial and harmful to biodiversity in order to reverse the biodiversity crisis. Similarly, it is unclear whether the NBS approach, as emerging within the CBD, will incorporate human rights safeguards into its operating principles. Indeed, even though relevant documents make references to Free Prior and Informed Consent, fair governance structures, human rights etc., there is a palpable sense that these are secondary to aims of economic growth and development. These concerns are bolstered by the fact that the negotiations, and ensuing texts have not provided clear safeguards for implementation that incorporates these aspects.

It seems that NBS may already be firmly embedded within the Post-2020 Global Biodiversity Framework text and discussions. That said, it’s important to recognise the pitfalls of adopting a concept that has emerged elsewhere, especially when it’s faced extensive criticism within its forums. Outside the CBD, the NBS discourse has gained traction and interest amongst large corporate interests, enabling green-washing of business as usual and failing to address devastating social and environmental impacts. Meanwhile, discussions seem to have failed in recognising the diverse voices and knowledges crucial to environmental policy-making. It is therefore imperative that the incorporation of an NBS approach within the CBD does not constitute a ‘step back’ from progress made up until now. Moving forward, the concept must recognise the diversity of knowledges and perspectives relevant to biodiversity protection, as well as ensure strong, robust safeguards that do not undermine the rights of indigenous peoples and local communities, especially women and girls who are often disproportionately impacted by top-down decision-making. It is with these aims in mind that W4B will be contributing to future discussions on the post-2020 biodiversity framework.