The Need for Women’s Representation: Reflections on the Africa Protected Areas Congress 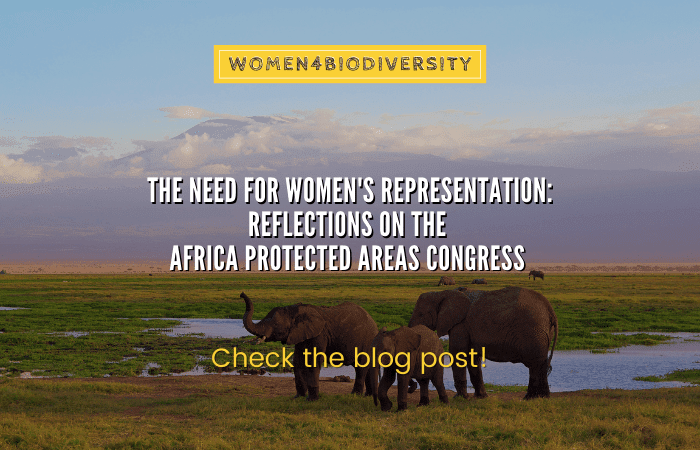 Beautiful Kigali, the Capital City of Rwanda, was a hive of activity from 18-23 July, hosting the inaugural Africa Protected Areas Congress (APAC). The Government of Rwanda, the International Union for the Conservation of Nature (IUCN) and the African Wildlife Foundation (AWF) jointly convened the event with the theme “For People and Nature.” It attracted more than 2,400 participants from 53 African countries and 27 others. There was a broad range of participants; governments, African regional bodies, NGOs, national and international experts and organizations, local communities, Indigenous Peoples, youth, academia, the judiciary, development partners and the private sector.

At the start, I was worried about the inclusivity of this Congress. I had come by the information that the youth and indigenous peoples and local communities (IPLCs) had had pre-Congress meetings to prepare for their meaningful engagement. Women as a major constituency, however, had no such opportunity. Were there people specifically thinking of gender-responsive action? In contrast, at the United Nations Framework Convention for Climate Change (UNFCCC), the UN Women Major Group (WMG) and the Women and Gender Constituency (WGC) closed ranks and took it upon themselves to ensure that gender was taken into consideration at every main event and every side event they participated in. The Women’s Caucus- UN CBD has the same commitment at the United Nations Convention on Biological Diversity (UN CBD).

On a positive note, I was able to speak at the APAC side event “Resolving Resource Use Conflicts as a Path to Security & Conservation in and Around PCAs.” I talked about conflict having no conscience. It destroys natural resources, and the military is the greatest emitter of greenhouse gases from their fossil fuel-guzzling equipment. Arbitration in a conflict is not the best tool to end conflict as it treats only symptoms. The best tool is a human rights-based foundation.

Regarding human rights, APAC identified priority actions to strengthen Africa’s protected and conserved areas in a just, equitable and fair manner that will deepen the involvement of IPLCs. Strengthening these areas are essential as Africa is among the world’s continents rich in biodiversity, where organisms make up one-fourth of the world’s biodiversity. The continent also has the largest intact assemblages of mammals in the world. However, Africa’s biodiversity continues to decline, with species and habitats ongoing losses.

Congress participants committed to acting with urgency to address the biodiversity, climate change and health crises, and their relationship to human development and well-being, yielding a nature-positive outcome.

The outcome of the Congress was the Kigali Call to Action for People and Nature, released on 23 July. I daresay it read like a sweet dream! The text has human rights-based language, with specific phrases such as “gender-responsive participation of all rights-holders and stakeholders, including IPLCs and youth,” and “access to justice information.” What the text missed, though, was specifics on user-friendly information for the linguistic and literal needs of the diverse spectrum of stakeholders. My joy became complete when I read “Enhanced understanding of the power relations among stakeholders, to help limit elite capture, injustice and corruption and to ensure that the marginalized, women and youth are genuinely included in decision making,” as one of the actions areas.

During the closing plenary, representatives of youth and Indigenous Peoples groups delivered statements, followed by the formal adoption of the Kigali Call to Action and closing remarks by the co-conveners of the event, the IUCN, the African Wildlife Foundation, and the Government of Rwanda. The absence of a women’s statement was conspicuous, though. May there be one next time.

Gertrude Kabusimbi Kenyangi has a 20-year of work experience in forest and biodiversity conservation right at the grassroots in Uganda. Recognizing her work, the UN Food and Agriculture Organization (FAO) awarded her the Collaborative Partnership on Forests, Wangari Maathai “Forest Champions” Award for 2015. She has been involved in the discourses surrounding the Convention on Biological Diversity since its inception, bringing a gender dimension and advocating for framing the CBD in its scientific and social identity. She is also a member of the Women and Gender Constituency of the UNFCCC and the Women’s Major Group of the UN.