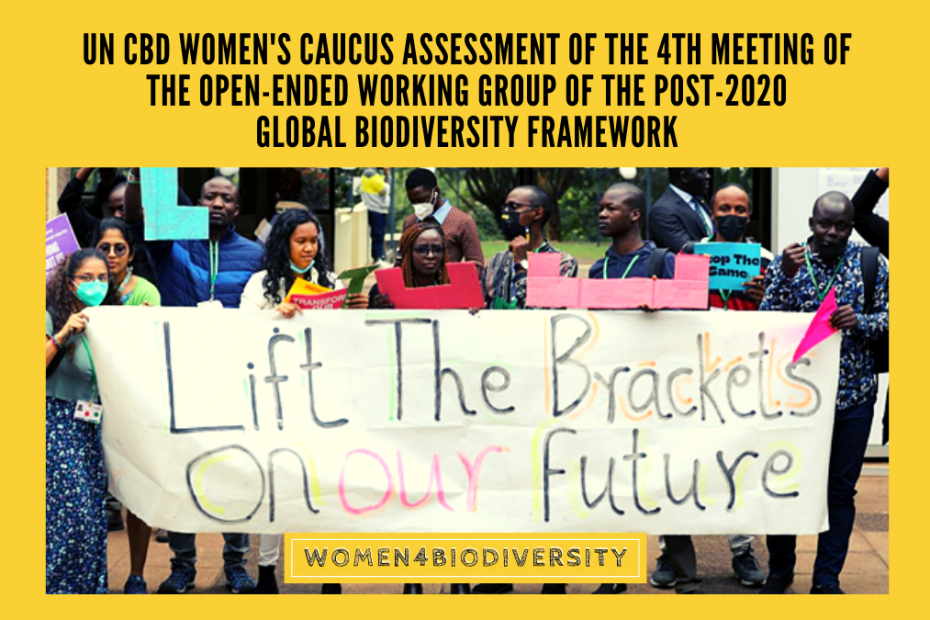 After almost four years of negotiations to develop the post-2020 global biodiversity framework (post-2020 GBF), the final balance of the OEWG-4 report is that the 196 Parties have not built a consensus on what should be the biodiversity policy for the next decade. Despite exhausting sessions, there was not enough political commitment, and most delegates showed frustration at the end of the OEWG-4.

The  4th meeting of the Open-Ended Working Group (OEWG-4) of the post-2020 GBF took place from 21 to 26 June 2022 at the United Nations Environment Program headquarters in Nairobi, Kenya, under a hybrid format. Around 1,300 participants from 156 countries debated the post-2020 GBF’s objectives and targets and critical elements to effectively implement the framework, such as reporting and transparency mechanisms and financing strategies. Additionally, time was allocated during the Nairobi sessions so Parties could advance their discussions around Digital Sequence Information.

The expectations of what could be achieved in this meeting were high because countries are against the clock to conclude a process already two years late. The post-2020 GBF must be approved at the CBD’s 15th Conference of the Parties (COP 15) at the end of this year and should be applied urgently and immediately as soon as 2023 begins. However, the resulting Nairobi texts are not close to being consensual but rather show various and sometimes contradictory options on relevant issues.

The red flags include a purist vision of conservation where the rights of populations, particularly indigenous peoples and local communities (IPLCs), are at risk. Another warning is the lack of ambition to transform all human activities, such as agriculture, fishing or extractivism, to sustainable levels for biodiversity and human health. Some countries often use the card of the “right to development” to limit the transformative capacity that this Framework can have.  Some use catchphrases such as “according to national circumstances and legislation” or those who resist equitably distributing financial, technological and knowledge resources so that the countries and people at a significant disadvantage in this planetary crisis they can face and also collaborate for the urgent and necessary transformative change.

As if that were not enough, given this complicated panorama, different achievements that the UNCBD Women’s Caucus and other constituencies have had, such as the various references to the human-rights based approach, intergenerational equity, and IPLC rights, are in brackets and are under risk of being deleted or placed where they will not have a determining operative role in international and national biodiversity policy. Namely, the case could be seen regarding section B.bis, which has become more controversial due to several repetitions of fundamental principles already stated in the Convention. Moreover, if we fail to get the references to human rights and IPLCS in the targets where they are already under the argument of them being addressed, we will end up with a GBF blind to human rights.

However, the light shone on Targets 20 and  21, where the language regarding human rights, indigenous and collective rights, and traditional knowledge, equity, and youth was strengthened. Notably, we celebrate the inclusion of a stand-alone target on gender equality, which Costa Rica officially proposed back in Rome in 2020. The so-called Target 22 received significant support from the Latin American and Caribbean Group (GRULAC) region and other countries, resulting in more than 50 Parties who have so far stood up for women’s and girls’ lives.

With time against us and the biodiversity crisis worsening, the negotiations will continue in the OEWG-5 and conclude in the second part of CBD COP 15, which is scheduled to be held from 7 to 19 December 2022 in Montreal.

The post-2020 global biodiversity framework will be the Strategic Plan of the UN Convention on Biological Diversity (CBD) that will guide the world to address the adverse impacts of drivers of biodiversity loss by 2050. This Framework began to be drafted in 2018 during the CBD COP 14 and was further developed within the Open-Ended Working Group (OEWG) on the Post-2020 Global Biodiversity Framework (GBF). After almost 2 years, the first face-to-face hybrid meeting resumed in March 2022 with the 3rd meeting of the OEWG in Switzerland, but the discussions among the 196 Parties to the CBD did not reach a consensus, so a fourth meeting of the OEWG was scheduled.