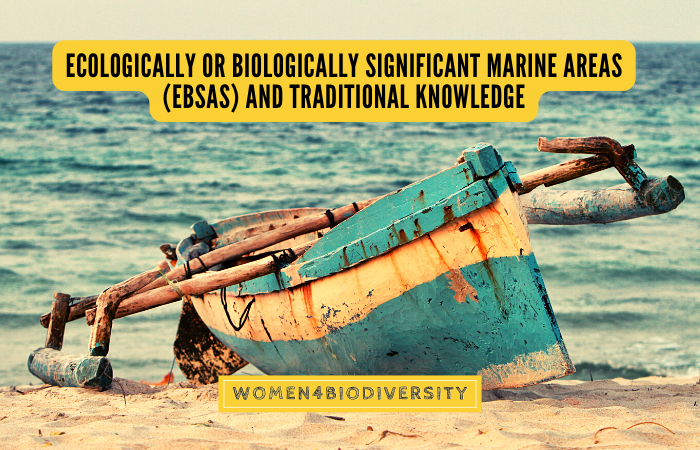 The 2008 Conference of Parties to the Convention on Biological Diversity (CoP) introduced the scientific criteria for identification of areas to be designated as ecologically or biologically significant areas (EBSAs). This was basically introduced to describe and identify areas, that are ecologically or biologically important, and to identify these, scientific criteria was suggested. However, these are initially meant to be just areas identified, without any management measures implemented. The CoPs have called for the integration of traditional scientific, technical and technological knowledge of indigenous and local communities, but these are yet to be implemented in any of the processes in a systematic manner. Though COP decisions, do not talk about management measures, it does, however, ask Parties to develop measures to ensure conservation and sustainable use of EBSAs, including through area-based management tools.

The focus all along, have been on the scientific area without any criterial on social and cultural issues. The CBD secretariat had created a training manual on traditional knowledge, to help integrate the entire EBSA process. The CoP decision calls for identifying socially and culturally significant marine areas as well, however, there has no focus on this aspect. Some countries have not only identified and described EBSAs, they have also designated them as protected areas.

The CBD’s Sustainable Ocean Initiative (SOI) and informal advisory group, have been focusing on assisting parties in achieving a balance between conservation and sustainable use of marine and coastal biodiversity. They call for a holistic, integrated capacity building frameworks, focusing on integrating traditional knowledge for the description and identification of EBSAs. It also seeks increased participation of indigenous peoples and local communities.

Recently in August 2022, the secretariat to the Convention on Biological Diversity, pursuant to recommendation 24/10 of the Subsidiary Body on Scientific, Technical and Technological Advice (SBSTTA), invited the nomination of experts to participate in the online discussion forum on ecologically or biologically significant marine areas, to be held from 14 to 21 September 2022, in preparation for the fifteenth meeting of the Conference of the Parties. This webinar was meant to further advance the discussions on EBSAs, before the recommendation was sent to COP 15. The SBSTTA focused on a number of elements including: general consideration for the modification of descriptions of EBSA and in the description of new areas, repository and information sharing mechanism; modifications for editorial reasons; reasons for modification; proponents of new areas; modifications of descriptions of EBSAs in areas with national jurisdiction, in areas beyond national jurisdiction, and in those that straddle multiple national jurisdictions, amongst others.

The Annex 1 of the recommendation (general considerations for modification of descriptions and in describing new areas), only highlighted that there should be collaboration with relevant organizations, experts and knowledge holders, including indigenous peoples and local communities, as holders of traditional knowledge, with their prior and informed consent or free, prior and informed consent or approval and involvement, in accordance with national circumstances and legislation and international obligations.

EBSAs, were originally proposed and meant to be described in areas beyond national jurisdiction. This was also highlighted by Sweden during the discussion in the forums. While COPs decisions have made some reference to traditional knowledge, there has not much been implementation both at the national and regional efforts.

The context and the issues in describing such areas within coastal waters, and in regions where indigenous peoples and local communities depend on their livelihood and cultural needs, are not taken into account. In such regions, it is important to not only focus on ecological, but cultural aspects as well. There have been numerous efforts undertaken within the CBD’s Sustainable Ocean Initiative, as well as with the Informal Advisory Group. Canada, had also raised concerns in the forum, regarding the need to integrate scientific and indigenous knowledge.

Ramya Rajagopalan, has been working with small-scale fishing communities, and with fishworker movements, as part of the International Collective in Support of Fishworkers for more than a decade. Currently, as a freelancer, working towards promoting sustainable conservation initiatives, with the full and effective participation of indigenous peoples and local communities.