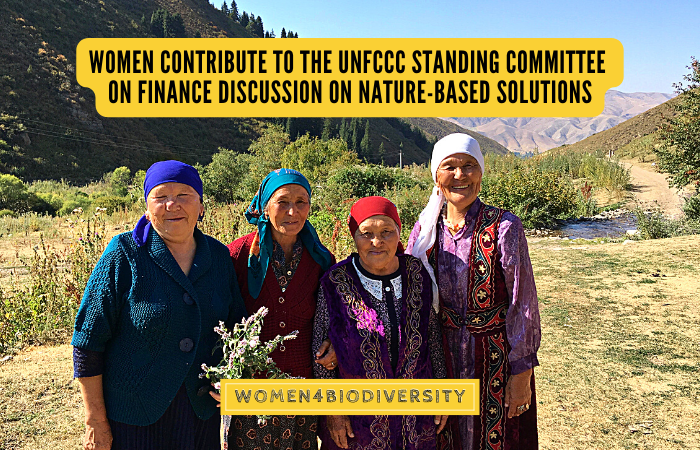 Women’s groups and many other actors have frequently highlighted the need for more coherence between climate and biodiversity policy. Yet, sadly, several bodies of the UN Framework Convention on Climate Change (UNFCCC) continue to ignore discussions in the Convention on Biodiversity (CBD) and other bodies. The UNFCCC Standing Committee on Finance, which met late September, is no exception, as it decided to organize an entire forum on how to finance nature-based solutions (NBS) before the CBD has even reached an agreement on whether they support the use of this term. Happily, the Women and Gender Constituency to the UNFCCC (WGC) was invited to contribute to the discussions.

The WGC highlighted that it strongly preferred the use of the term ecosystem approaches, or ecosystem-based approaches to adaptation, for which very good guidance was adopted by the CBD.  It recognized that the UN Environment Assembly (UNEA) adopted a definition of NBS, but that definition does not exclude carbon offsets, and there was actually much concern expressed, including by Government delegations at the UNEA meeting, that NBS might undermine the climate regime. As a result, the resolution states: “…. recognizing the need for analysis of their effects, including in the long term, and acknowledging that they do not replace the need for rapid, deep, and sustained reductions in greenhouse gas emissions …..,”

In light of this, it is premature to promote financial support for NBS before this analysis of the long-term effects has taken place. NBS financed through offset projects in particular should be avoided, as these would lead to replacement of reductions, and thus violate the UNEA resolution. If we listen to warnings of the Intergovernmental Panel on Climate Change, there simply is no space for offsetting in current mitigation strategies. We need to both significantly reduce emission reductions, especially in the energy, livestock and transport sectors, and conserve and restore the planet’s ecosystems, in line with the commitments made under the CBD.

There is a broad concern about the current lack of agreed standards in carbon offset markets, which has triggered many projects that compromise the integrity of global agreements in the field of climate change and biodiversity, especially due to their lack of permanence. This is something the planet simply cannot afford. And as women, girls, and non-binary people in all their diversity are disproportionally affected by climate change, their first interest is in a strong and ambitious climate regime that does not include false solutions like carbon offset projects.

As pointed out in their official intervention last year, the WGC fears that the concept of NBS has been twisted by vested interests to falsely brand highly questionable practices as “green,” including large-scale tree planting, which has significant social impacts as it can trigger land grabbing and compete with food sovereignty. These impacts are gender-differentiated as women tend to have less secure land tenure rights and more care responsibilities in terms of securing food for their families. As many NBS projects are driven by corporations, they tend to be profit-oriented and marginalize economically less powerful actors like women, who depend more on the non-monetary values and products ecosystems can provide.

Instead, the WGC calls for gender-responsive, community-driven and holistic approaches to climate change mitigation, adaptation and resilience like coastal habitat restoration, integrated water resources management, livelihood diversification and community-led sustainable forest governance. Examples of such projects are annually showcased at the Gender Just Climate Solutions award ceremony, and many additional inspiring examples can be found on the GFC website. As pointed out during the SCF discussion, it makes little sense to now re-brand such solutions, which have often existed for generations, as “nature-based” solutions, as this will only exclude some of the best rights-based approaches.

Earlier, the UNCBD Women’s Caucus also maintained that NBS must recognize the diversity of knowledges and perspectives relevant to biodiversity protection, as well as ensure strong, robust safeguards that do not undermine the rights of indigenous peoples and local communities, especially women and girls who are often disproportionately impacted by top-down decision-making.

Talking about coherence with the CBD, perhaps the main priority in terms of finance is to divest from harmful sectors and projects like fossil fuels, bioenergy and unsustainable livestock farming and align all financial flows with both the Climate and the Biodiversity Convention. This is a central element of the draft resources mobilization strategy that is currently being discussed by the Parties to the CBD. It is estimated the global community continues to invest more than 30 times more funding in projects that harm biodiversity, than it invests in projects that conserve biodiversity. As highlighted in GFC’s Forest Cover report on feminist perspectives on extractivism, projects that harm biodiversity are particularly harmful for women, as they depend most on free access to healthy ecosystems like forests. There is thus a clear need for the Standing Committee on Finance of the UNFCCC to align its work with the resource mobilization strategy of the CBD and to focus one of its work streams on redirecting and eliminating these harmful financial flows.

It was also highlighted that it should be ensured actions and targets to immediately halt forest loss in line with the Sustainable Development Goals and to conserve other ecosystems are separate from and complementary to targets to reduce emissions, as the planet cannot afford either/or strategies anymore. We need conservation and radical emission reductions and  divestment from all harmful sectors and mobilization of resources for genuine rights-based and gender just approaches, and we need it all as soon as possible.

Simone Lovera is the director of the Global Forest Coalition, a worldwide feminist coalition of more than 120 Indigenous Peoples’ Organisations, women’s groups and NGOs from 71 different countries striving for rights-based, gender just and socially equitable forest conservation policies. She is an international environmental lawyer by training with a PhD in international forest policy and 30 years of experience in international campaign work.