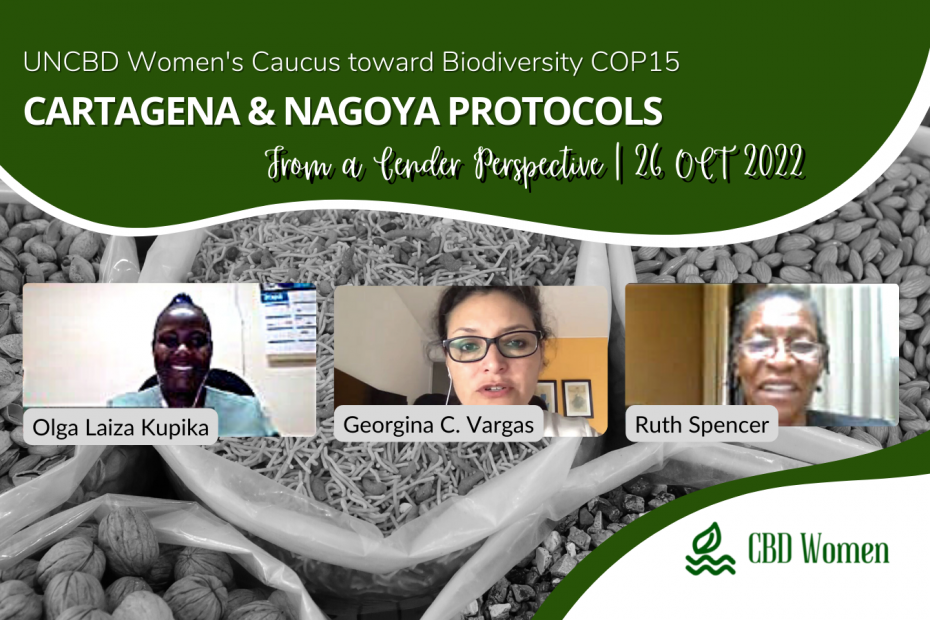 The UNCBD Women’s Caucus held an open webinar on 26 October 2022, its last preparatory session toward CBD COP15, intending to introduce the basics of the Protocols and to reflect on key topics that will be discussed during Cartagena Protocol MOP 10 and Nagoya Protocol MOP 4. The expert panel was integrated by Georgina Catacora Vargas from Bolivia, researcher at the Academic Peasant Unit “Tiahuanacu” of the Bolivian Catholic University; Ruth Spencer from Antigua and Barbuda, chair of the MEPA Trust and advisory person for the UNCBD Women’s Caucus; and Olga Laiza Kupika from Zimbabwe, Associate Professor and Chairperson of the Department of Wildlife Ecology and Conservation at the Chinhoyi University of Technology. The dialogue, facilitated by UNCBD WC co-coordinator Amelia Arreguin, aimed to build common ground around the Protocols to the Convention on Biological Diversity (CBD) and to identify entry points for gender analysis and advocacy.

As per the intervention of Georgina Catacora Vargas, it was established that Cartagena Protocol focuses on biosafety and adverse effects of Living Modified Organisms (LMO), considering human health. It is of utmost importance to address it from a gender perspective, as evidence and accumulated experience show that LMO affects women differently. For example, the technological package of modified genes is accumulated in women’s milk and placenta. On the other hand, unauthorised and undetected LMO is being used commercially; this reduces the possibility of preventing adverse effects.

Regarding what will be discussed in Cartagena MOP 10, the expert highlighted a series of contentious issues that must be followed closely. First, it is crucial to understand the relationship between Digital Sequence Information (DSI), the third objective of the CBD and LMO and the access to financial mechanisms. Lastly, the focus must be on preventing adverse effects on biodiversity, the precautionary approach and their relation with human health.

As explained by Ruth Spencer, the Nagoya Protocol establishes access obligations, legal certainty, transparency and clarity with the implementation of Prior Informed Consent  (PIC) and Mutually Agreed Terms (MAT) in the context of Genetic Resources utilisation to maintain its diversity and the fulfilment benefit-sharing obligations. These benefits could be monetary or non-monetary, for example, the percentage of the earnings for selling a newly developed product, capacity building or sharing of research results. Among the international obligations of the contracting Parties are the ensure of PIC before access to GR, the inclusion of IPLCs customary laws and Traditional Knowledge in national regulations and that NP must be implemented in multiple manners and collaborating with other international agreements, as the International Treaty on Plant Genetic Resources for Food and Agriculture (ITPGRFA).

Regarding the challenges in implementing the Nagoya Protocol that will be relevant in the Meeting of the Parties (MOP) 4 are the different agreements dealing with plants and GR generating competing interests; also, some of the GR areas available through the Multilateral System of Access and Benefit-Sharing of the ITPGRFA but only a few are available on farmers fields, and several plants significant to food supplies globally are not.

Articles 21 and 22 of the Nagoya Protocol

Olga Laiza Kupika deepened the explanation concerning the main tools and mechanisms to implement Articles 21 and 22 of the Nagoya Protocol, which deal with awareness-raising and capacity-building. As explained, Article 21 obligates contracting Parties to include the importance of GR and TK associated with GR and to take measures such as promoting NP and organising meetings between IPLCs and relevant stakeholders. While the obligations around Article 22 are capacity-building to implement NP, negotiate MAT and develop domestic legislative, administrative or policy measures on Access and Benefit-Sharing (ABS). Both aspects are important for local communities because they know what is available and their responsibilities and secure access to relevant information.

The main aspects that will be discussed in Nagoya Protocol MOP 4 must be addressed with a gender perspective, as a larger proportion of indigenous women in rural areas must lead in awareness raising and capacity building in conservation. Also, indigenous people’s knowledge can be embraced to secure proper and adequate ABS. A human rights-based approach is critical to achieving gender equality and equity in conservation.

At the end of the workshop, UNCBD WC members were given a few minutes to ask the specialists their questions and doubts, which resulted in an enriching conversation about the key topics to be discussed during Cartagena Protocol MOP 10 and Nagoya Protocol MOP 4. Regarding the entry points for gender analysis and advocacy, in the context of the Cartagena Protocol, there is plenty of evidence and accumulated experience that show how LMO and modern biotechnology are affecting women in a greater way. About Nagoya Protocol, there is a larger proportion of indigenous women in rural areas. Also, they are key actors in biodiversity conservation and holders of TK related to GR, as they hold traditional medicine knowledge, this is the main aspects to be considered during the following discussions.