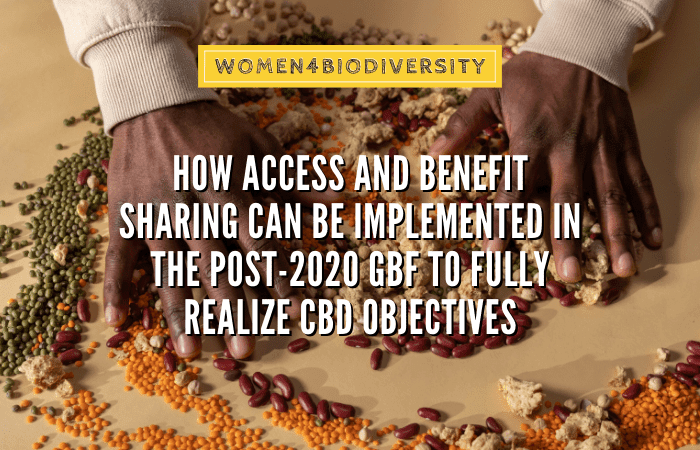 The Secretariat of the Convention on Biological Diversity (SCBD) recently convened the Fourth meeting of the Open-Ended Working Group (OEWG-4) on the post-2020 global biodiversity framework (GBF) last 21-26 June in Nairobi, Kenya. The meeting brought together Parties to the Convention on Biological Diversity (CBD) and observers from across the world. Upon successful negotiations by Parties in the fifth OEWG scheduled to take place later this year in Montreal, the GBF  will be adopted at the COP 15  and will form part of the GBF on community-based approaches on conservation and sustainable use of biodiversity that results in the halting of biodiversity loss and its ultimate restoration.

These objectives are the basic foundation of the GBF, developed by the Parties and additional inputs from observers, and with 4 goals and 21 action targets. Recently, the GBF has a proposed stand-alone gender equality target.

GBF milestones need to be realized by the year 2030. One of these action targets is Target 13 that is on access and benefit sharing (ABS) of genetic and biodiversity resources. The focal point of this action target is to facilitate fair and equitable distribution of the arising benefits between the users and providers of the genetic and biodiversity resources. The Nagoya Protocol is the key international agreement in biodiversity, which aims to provide a framework for access to Genetic Resources and the Fair and Equitable Sharing of Benefits Arising from their Utilization to the CBD.

Parties, through the implementation of Target 13, will play a fundamental role in evaluating whether these goals are actually realized by enacting these ABS principles as part of their regulatory framework for effective legal, policy, and capacity building measures. In addition,  Parties will be required to formulate the regulatory frameworks in adherence to the ABS instruments and should be consistent with the CBD and the Nagoya Protocol.

The GBF, in Target 13 bis, aims to establish a global multilateral benefit sharing mechanism  since there is currently a lack of consensus regarding the state practice at the regulatory level. Another reason why Parties would opt for a centralized global mechanism is due to the inconsistent implementing measures by provider countries. This is due to the fact that some provider countries choose to fully incorporate the ABS in their legislative frameworks related to environment and biodiversity issues while some enact the ABS as stand-alone legislations.

The global multilateral benefit and sharing mechanism should set clear standards on the access to genetic and biodiversity resources and whether permission needs to be granted when the access happens within the boundaries of the provider countries. This is to mean that in addition to the access requirements and while promoting the wider application, with the approval and involvement of the holders of such knowledge, innovations and practices by the provider countries, emphasis should be given to the equitable sharing of the benefits arising from the utilization of such knowledge, innovations and practices.

Therefore, the mechanism needs to outline and incorporate information on whether benefit sharing agreements between providers and users of these resources need to be signed prior to or after granting the access. For instance, the providers – for example, biodiversity-rich countries – can enter into agreements with users such as biotech companies before or after access and utilization of the genetic and biodiversity resources. These agreements will dictate how, when, and what access is granted and how the benefits utilized are to be shared to the providers.

This will ensure that equality and fairness is achieved in the fair and equitable sharing of both monetary and non-monetary benefits and the rights and interests of the parties are safeguarded. If the utilization of these resources is directly linked to biodiversity conservation and restoration, the mechanism could exempt the users from benefit sharing in the spirit of achieving the targets of the GBF.

Furthermore, as a monitoring mechanism and to ensure full realization and increased fair and equitable sharing of benefits arising from utilization of genetic and biodiversity resources such as Digital Sequence Information, the derivatives and traditional knowledge, the providing countries can integrate periodic reporting systems to track  progress on the benefits gained. Where the consumers of the resources breach the benefit sharing agreements, sanctions can be imposed in terms of fines, and, where the breach is extremely severe, criminal proceedings can be instituted.

In conclusion and lest we forget, women and girls play a substantial role in the management and conservation of genetic and biological resources. For example, in some communities, women have been traditional knowledge holders, practitioners of agroforestry, preservers of indigenous seeds, cultivators and harvesters of crops, among others. Despite this crucial role that they play, they continue to be undermined and their rights such as access to land and resources remain unsecured. Women and girls need to be considered as primary stakeholders and be given opportunities through the formulation of this mechanism. This in particular can be achieved by substantially increasing their access to policy formulation avenues where they can influence access and benefits sharing decisions.