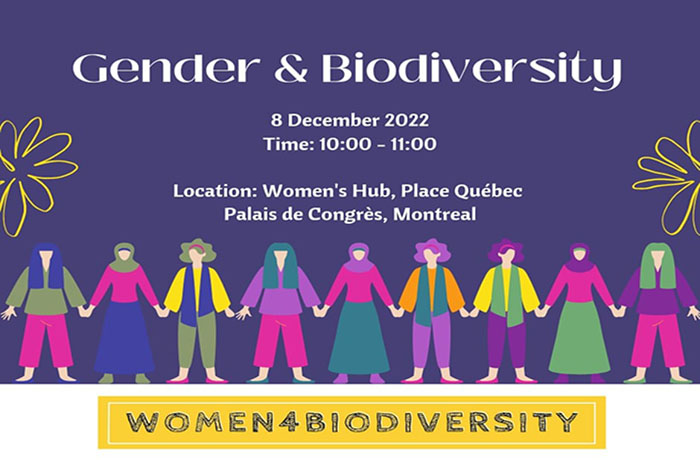 To kick off the series of events at the Women’s Hub at the Fifteenth Conference of the Meeting of Parties to the Convention on Biological Diversity (CBD COP 15) in Montreal, Canada, the Women4Biodiversity team launched policy briefs on gender at Palais de Congres on 8 December 2022.

The Women4Biodiversity team presented the UNCBD Women’s Caucus reports and policy guides, which included the critical demands regarding gender equality and women’s rights for the COP 15 negotiations. The documents were intended to be a guide and a tool to share with negotiators, observers and decision-makers at COP 15 to ensure any decision from these decisions do not perpetuate gender inequalities.

The session also included an open space for the audience to ask the panelists additional questions and share their experiences. Participants felt that “the event was a must, truly enriching and needed.” They affirmed that the publications would help them assess the implications of the COP 15 decisions on gender equality, and would therefore guide planning interventions for gender justice, especially to help prevent the exacerbation of existing inequalities and to ensure positive impacts for both women and men.

Publications launched at the event are as per the below,

This document is an information resource for everyone who wants to explore and understand the nexus between gender and biodiversity. The aim of it is to help participants during COP15, and side events or meetings to get a quick idea of why gender is a biodiversity issue and to be aware of the different resources that already exist in the context of the CBD so that they can be used during the negotiations, proposals, events or whenever is needed.

The resources are classified according to critical topics such as Gender and biodiversity, CBD decisions and documents, Gender Plan of Action, National Biodiversity Strategies and Action Plans, access and benefit sharing, land and agriculture, forestry, fisheries, coastal and marine biodiversity, gender-based violence, among others. The resources shared included policy briefs, scientific papers, webinars, and online courses.

This is an informative document to help negotiators identify if their proposal, argument or reflection on any of the agenda items or discussion promotes gender equality or not. This guide was designed to support anyone involved in the CBD COP 15 negotiations and any biodiversity decision to self-assess whether their proposal is gender-responsive.

Based on a framework and tools for gender planning (Kabeer and Subrahmanian, 1996) and the Gender Integration Continuum (2017), this resource defines gender-blind and gender-responsive policies. It also contains ten questions that will guide the reader to identify entry points to mainstream gender equality criteria into their policy recommendations. The document concludes by highlighting three critical elements for the effective implementation of gender mainstreaming based on a 2018 paper by UN Women.

Under the premise that only a gender-responsive policy can conserve biodiversity in the long term, thus fulfilling the 2050 vision of living in harmony with nature, or more importantly, saving the lives of future generations, this short booklet contains specific text recommendations from the UNCBD Women’s Caucus for the post-2020 global biodiversity framework.

The succinct text is directed to the Parties’ representatives and every delegate attending COP 15 to embrace gender justice as their cause and take it forward into what will be the most important document to define biodiversity policy for the next decade. The proposals on the Goals and Targets include recommendations to delete texts that could harm biodiversity and exacerbate gender inequalities. In parallel, there were suggestions to add or maintain critical text that was considered during the Fourth Meeting of the Open-Ended Working Group on the Post-2020 Global Biodiversity Framework in March last year in Geneva, Switzerland.