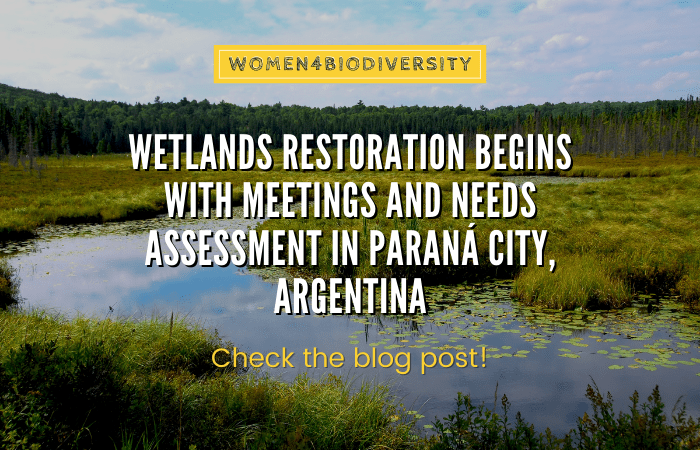 As part of the “Building resilience and weaving gender-responsive approaches to biodiversity governance” project, Women4Biodiversity aims to strengthen gender-responsive ecosystem restoration approaches in national goals and international commitments. The project, which began in September 2021, aims to support restoration efforts by women groups as well as their full and effective participation in various bodies that has a direct impact on their ecosystems at 6 pilot sites, one of which is Women4Biodiversity’s partners in Argentina – Fundación Ambiente y Recursos Naturales (FARN) in collaboration with Fundación CAUCE: Cultura Ambiental, Causa Ecologista.

FARN has been working at different levels to promote legislation and policies for the conservation and sustainable use of the most extensive wetlands system in Argentina (Delta del Paraná) and in collaboration with diverse local organizations and groups, including Fundación CAUCE.

The pilot site is located in Paraná City, Entre Rios province where Fundación CAUCE is working with a group of women from the organization “Cuidadores de la Casa Común Entre Ríos.” This organization is part of a national movement composed of social and community organizations founded in different parts of the country in response to the Encyclical Letter “Laudato Si” of Pope Francis, “Caring for the Common Home.” The group was established in Entre Rios in 2016 with the support of the Ministry of Social Development of Entre Rios province and Eco Urbano Foundation. It has over 30 young and adult members from vulnerable neighbourhoods west of Paraná City.

The wetland area to restore covers a total of 310 hectares. It is a representation of the area’s local natural, historical and cultural heritage. It is part of the most significant wetland system in Argentina, the Paraná Delta River (which includes three Argentine provinces, Entre Rios, Buenos Aires and Santa Fe). It is home to the biogeographical ecoregions of the “Espinal” (endangered at the national level) and the Paranaense Rainforest. Some of the tree species present in the area are: timbó, sauce, curupí, aliso, sangre de drago and espinillos. Among the birds are the cardinal, thrush, mockingbird, “tacuarita” and a variety of herons, ducks, cormorants, seagulls and pink flamingos (seasonal visitors).

The group of women that are part of Cuidadores involved in this restoration initiative live in the vulnerable neighbourhoods surrounding the wetland area in the western part of the City of Paraná. They have recently been trained in hiking, birdwatching and recognising native species, both fauna and various tree species. They began to develop a “Wetlands Community Tourism Circuit” that value the local historical and cultural heritage with a community approach.

In December 2021, CAUCE held a first virtual meeting due to the COVID-19 pandemic, and in February this year, a second one with the women of Cuidadores de la Casa Común, as well as with indigenous women living in the area. They discussed project implementation, and it was also an opportunity to connect with women who specialized in botany collaborating in this initiative.

The target group identified the need to increase women’s capacities to recognize native flora, eradicate exotic plants, and produce native plants in their own nursery garden. Additionally, there is a need to increase their capacities to analyze, acknowledge and advocate within the framework of biodiversity initiatives from the local and national governments and with a gender lens. The women would also need support in their work in showing the importance of wetlands’ landscape restoration with a human rights and gender approach in local schools. They should also have their experiences acknowledged and their voices heard in important institutional spaces and in social media.

CAUCE and FARN have attended meetings of the National Commission on Biodiversity (CONADIBIO, for its acronym in Spanish) hosted by the Ministry of Environment, more specifically, three plenary meetings via Zoom on September 23 and December 16 last year and April 21 this year.

Last May 26, CAUCE held a new meeting with women from Cuidadores to further look into the development of this project. In addition, they talked about the current situation of wetlands in the region, the process of the legal framework that currently protects them, and the draft law on wetland’s protection at the national level currently under consideration of the Parliament. Challenges for the approval of this draft law and the role of local communities in general and in this pilot site were discussed.